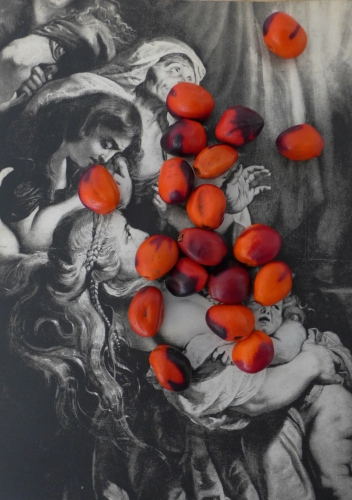 From the end of the 19th century to the 1970s there were about 100 biscuits and chocolate manufacturers within the ring of Antwerp. Every train station had its specific scent: 'Parein' at South Station, 'De Beukelaer' at Central Station, 'Biscuits Phoenix' at East Station and the chocolate aroma of 'Meurisse' at Dam station in the north. When the wind was favourable, the whole city would smell of biscuits and chocolate. People who stepped off the train in Central Station were overwhelmed by the sweet, intense scents of this city of biscuits: 'Koekenstad'.

The traces of erosion in 'Koekenstad'. Seeking traces of our origins through the imprints of our ancestors, where 'erosion' is a metaphor for transformation, the exhibition shows a still life that gains a new life, the artist as the scientist, researching in her lab, in a process of deconstruction and evolution. An exhibition looking into the history of the fusion of cultures, like a rough diamond transformed into a multi-layered, multi-facetted city that once had the sweet odour of biscuits and chocolate.

This exhibition project is an installation founded by a performative action that weaves a thread between the Venezuelan origin of the artist and her encounter with the city of Antwerp.

Sabrina Montiel-Soto is a filmmaker born in Maracaibo, Venezuela in 1969. Her artistic career is multidisciplinary, venturing in different fields of audio-visual, space-time creation. In her work, the observation and study of the human dimension and its social and psychological aspects serve as a starting point for the conversion of disjunction and absurdity into banality and reality. Montiel-Soto plays with a puzzle, putting together a thousand pieces of possibilities, spanning from film to sculpture, from insignificancy to greatness, from space to its perception.  Her work is an accomplice in her travels and in her personal and cultural experiences. She currently resides in Brussels and is co-founder of Calvacreation, a Franco-Venezuelan nomad platform for creation and reflection.